Reader Bill Baum writes in asking if it’s possible to batch convert DNG files to JPEGs. Bill says that several years ago, he converted several thousand images to DNG, but now wants them as JPEGs to ease the process of working with them in Nikon Capture NX, which doesn’t natively read DNG files. Fortunately, if you have Photoshop CS2 or CS3, you can easily use Bridge to batch process DNG conversions into JPEGs, Photoshop files, or TIFFs.

The easiest way to manage these batch processing chores is using Adobe Bridge. In Bridge, select the DNG files that you would like to convert, and then choose File > Open, or press Return. (You can also press Command-O, or Control-O if you’re using Windows.)

If it’s not already running, Bridge will launch Photoshop, and open the selected DNG files in Camera Raw. Because you’ve opened multiple images, all of the selected images will appear as thumbnails in the left side of the Camera Raw window. 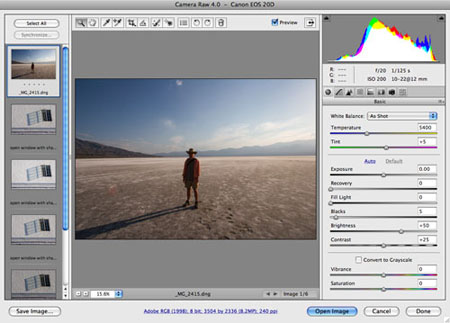 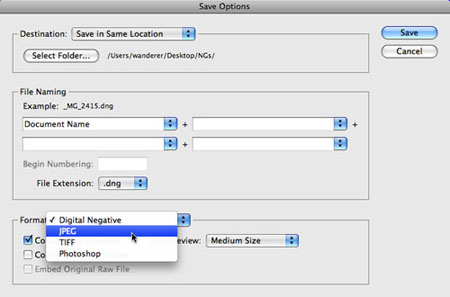 Configure all parameters to taste, and then click the Save button. Camera Raw will begin to convert your images, and will provide feedback at the bottom of the Camera Raw window. In Bill’s case, this might take a while, since a few thousand images will require a bit of time to convert. However, the conversion is a completely hands-off operation.

As with all batch operations, be sure you have enough disk space to hold your converted files before you start. If you run out of space, the batch operation will be interrupted, and trying to figure out what’s been done and what hasn’t is almost always a hassle when a batch interrupts.

This site uses Akismet to reduce spam. Learn how your comment data is processed.

The Practicing Photographer
"This slender book is chock-a-block full of useful guidance and advice on how to become a better photographer." (Amazon review)

Buy it today in either print or ebook (PDF AND ePub) versions from the CDP store.

Also available on Amazon, in Kindle and print versions.

For educational or bulk sales, send us an email to us for discount information and terms.